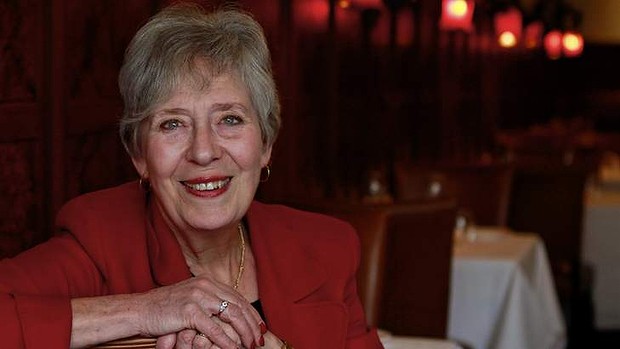 If you owned a restaurant in Melbourne anytime in the late part of the 20th century, there was one woman who counted more than anyone. It doesn’t matter whether we’re discussing the extravagant gastronomic boom days of the 1980s or economic downturn of the 1990s Rita Erlich was that woman.

You only had to say the name Rita, and everyone in the industry and in what was becoming increasingly food-obsessed public, knew whom you were talking about. That’s power in anyone’s language, or business. As a food critic, prolific author and editor of the foodies’ bible the Age Good Food Guide from 1983-1998, she had the ability to turn your business into a goldmine or send it down a mineshaft.

But Rita knew with power came responsibility and every comment, every point, hat or star she awarded or took away was agonised over. I knew, as did the public, that she knew about food, she adored the industry and was passionate about its development as any of its players. A generation of chefs and restaurateurs will tell you how much it pained them when she criticised what they had served up, but they will also tell you how often she was right, and so they got work to fix it. I was one of them. Conversely, I can testify how my spirit, confidence and numbers of plates soared when she appreciated what we’d created at the various establishments she reviewed.

“Our habit was to introduce ourselves after we’d paid the bill. And we’d ask for a copy of the menu, which became a record beyond the notes we took. And those menus just kept growing” (Erlich 2012).

A beautifully presented menu was always very well received. I’ve witnessed Rita’s face turn from joy to sheer disgust as she wiped her hand clean from a soiled Carte. The use of verbs on menus also displeased her, such as ‘ingredients cascading or resting a top a nest of something’. This style of menu writing was prolific once; now it is replaced by a list of ingredients and non-descript methodology.

“Printed menus were a sign of great formality and we didn’t have menus that were written like shopping lists, so if you didn’t bring your glasses you were in trouble” (Erlich 2012).

During this era, it was imperative for the restaurateur to know what the critic looked for. At my father’s restaurant in East Melbourne, I recall on occasion that new menus would arrive via the highly paid design agency, only to discover a single error, despite endless hours of proofreading. In April of 1985 Rita reviewed Gowings for the first time. I recall waiting outside The Age building on Spencer Street with one of the floor staff. By 2am on a chilly Melbourne Tuesday, the freshly prepared edition rolled off the press and into our eager hands. Shards of sheer terror, coupled with a pinch of optimistic anticipation engulfed us.

Like a steaming packet of fish and chips, we passed the parcel and tore away the outskirts of daily news to find our way to the just-baked food section called Epicure. Our mission was to report back to my father, a formidable man with a fierce temper. Fortunately for all, Rita entitled her review, “The air of a place about to prosper”. A favourable review was published with “the distinction of being one of the very few menus in Melbourne without a spelling error”. We had been spared the wrath of both proprietor and food critic simultaneously. If there were less supportive remarks about the execution of a dish or the style of the establishment, the proprietor and chef would swiftly revise and renew the issue. Once the initial hurt had dissolved, what remained was a deconstructed plate of highly useful, constructive criticism.

Restaurant reviewing has changed dramatically since Rita’s days at The Age helm. She observed recently it is no longer an evaluation process. Rather, it is an evolutionary reaction to what people want, because, she justifies, they way we eat has changed so much.

I asked Necia Wilden, food editor for The Australian what she thought about the rise of cash for comment food bloggers. She had this to say: “What if the readers knew that the blogger was compromised?” Necia added that when “John Lethlean writes a critical review in The Weekend Australian Magazine, and I mean a really critical review, a hatchet job – our readership goes through the roof. Because everyone loves a ‘bad’ review” (Wilden 2015).

At the completion of my first career as a restaurateur in Melbourne, I contacted Rita to see if she would share a few anecdotes about my father’s life, and perhaps offer a healthy recipe for a book I was writing. With the professional veil now lifted between critic and restaurateur, we formed a firm friendship. At the time, she too was writing a book with Dr Alice Murkies called Colour Me Healthy that offered a “new and easy approach to healthy eating. It is the book that every nutritionally confused person needs”. Rita insisted we keep in touch. We have.

Over the last fifteen years, Rita and I have talked passionately about nutrition, the restaurant industry and good eating. We discussed for the purpose of this interview, the impact of social media on restaurant reviewing. “What’s wanted has changed”, she says. “The way we eat has changed, chefs are now shuffling around dietary requirements.” We agree that elimination diets such as eradicating gluten, complex carbohydrates and fructose can greatly change our gut flora. She adds: “People with dietary requirements are often not eating anything fermented such as wine, cheese or bread so their gut flora has changed.” Conversely, there is a push to trendy products such as coconut water, and ferments including modern twists on kraut, kombucha and pickles.

She reminds me that the elimination of a food group is acceptable as a culturally communal decision in some religions. However, she adds, when it comes to the newly founded Paleo diet, she declares, “Paleo is about re-writing human history”.

I wondered what her prescription for a happy life is. I discovered it’s a jolly good dose of vegetables, fruit, grains, protein, exercise, social interaction and an active mind. Ultimately, Rita suggests, “we should bring back Grace before meals so we can truly express thanks for what we are about to receive”.

Disclaimer
Samantha Gowing is a candidate in the Le Cordon Bleu Master of Gastronomic Tourism program. She is a chef, nutritionist, author, blogger and former judge for the NSW Restaurant and Catering Association of NSW.  This is an unsolicited review for the purpose of academic submission. No chefs or critics were harmed in the process.