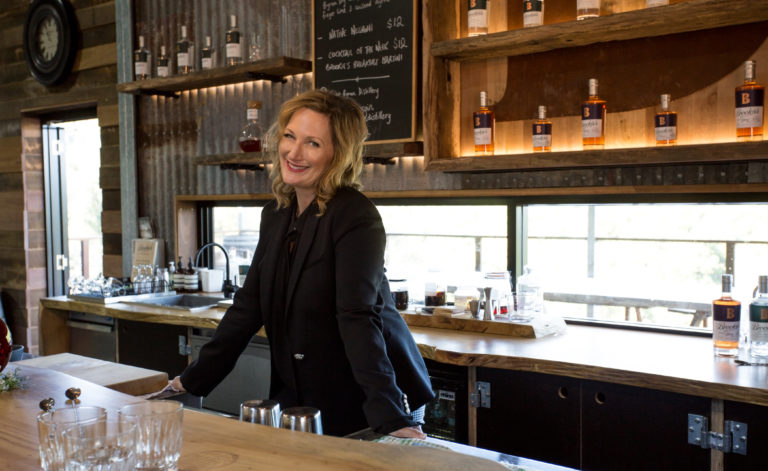 The Gowing name has been synonymous with good food, bars and cars in Australia since the automative boom of the 60s and the gastronomic boom of the 70s.

Excerpt from The Byron Bay Echo 2009 by Victoria Cosford.

Samantha Gowing was 20 years old when her father’s horse won the Melbourne Cup. His hand gripping hers, she watched as What A Nuisance came hurtling over the finish line – and even, later on, meeting the Prince and Princess of Wales could not compete with that entrancing moment.

This was the Before part of Sam’s life. As an even younger child she would fall asleep over chocolate souffles in her father’s restaurant, 2am and the air thick with smoke from his cognac-accompanying cigarettes at shift’s end. A self-educated man, Dennis Gowing went from the car trade into stud farms, race horses, art collections and eventually Jackson’s restaurant in Toorak via a stint as a television personality; he became restaurateur, according to Sam, ‘by default and by discernment’. It was almost inevitable that Sam and her brothers would carry on the tradition though, in Sam’s case, not before a Fine Arts degree she never completed, a kimono-wearing period as maitre d’ in a Japanese restaurant (she had been studying Japanese since she was nine); a motorbike accident putting an end to that; her own catering business with friends.

The accident led her toward yoga and Pilates (a foretelling, perhaps), though when her father became ill she was, to use her expression, ‘recruited back into the fold’. By now it was Gowings in East Melbourne, a fine-dining, two-and-a-half-hatted establishment doing 85 covers a night. Sam, loving it, threw herself into it with vigour until the late 80s, when Fine Dining was suddenly what people no longer wanted – or could afford. This was the era when pubs transformed their dining spaces into fashionable bistros serving up ‘contemporary Australian cuisine’ (Caesar salads, salt and pepper squid, pumpkin and fetta combinations), and the Grace Darling Hotel Sam’s family acquired was one of the forerunners. At the tender age of 24 there she was a publican – and for the ensuing seven years she and her brother ran this bluestone hotel built in 1854, steering it into a multi-faceted dining emporium complete with acoustic venue where the likes of The Waifs, Linda and Vika Bull and Stephen Cummings were launched. Some of her father’s glorious art collection – Clifton Pugh, Tim Storrier – hung from the walls. Those were the hard-living hard-drinking days of parties and wine launches, a 3am licence and unprecedented outside dining, pizzas at midnight, coffee and cigarettes for breakfast

Seeing Sam now – the After period – I find it hard to imagine. Small and blonde and glowing, this is a woman whose degree in Nutritional Health Science has turned her into a culinary nutritionist; a yoga and Pilates instructor; a teacher of Japanese cooking; a campaigner for organics well before became the word became fashionable. She works at Gwinganna and takes people on wellness retreats to Sri Lanka; she is up at 5am, steaming broccoli with tamari and ginger for breakfast. Having moved to Byron Bay for her ‘physical and spiritual health’, she still commutes to Melbourne where she does cooking demonstrations at the Prahran markets and consults as nutritionist at the Grand Hyatt. With half a lifetime of food, hospitality and charm in her blood, she has managed to transform the passion and the instinct for all into a way to help others eat better and feel better – and I have the sense she has only just begun.
Download Sam’s bio 2017[dt_sc_hr /] Samantha Gowing learnt to cook from the age of six and was influenced her maternal grandmother, Evie and her beloved father, Dennis. Both taught her the fundamental elements of cooking including Australian/Anglo-Saxon fare such as Pavlova, classic sponge cakes, Yorkshire pud and roasts of all sorts. Sam did her apprenticeship on the restaurant floor of Gowings East Melbourne, trained by highly skilled European staff who took their trade seriously.

Dennis Gowing was a cockney orphan who came to Australia as a ’10 pound Pom’ and made his fortune in the car, TV, art, horse racing and restaurant industries in a career that spanned over three decades. Kevin Dennis New Faces was an Australian talent show that preceded the British show of the same name, produced at GTV-9 Melbourne.

A colourful Melbourne entrepreneur who successes included owning the winner of the 1985 Melbourne Cup, What A Nuisance, creating multi award-winning fine dining establishments such as Jacksons in Toorak (1977-1984), Gowings Restaurant (1984-1990) which was awarded  2.5 Chefs hats by the Age Good Food Guide and nominated as one of the 50 Best Restaurants in Australia by renowned food critic Stephen Downes.

“The food was good, the wine list impressive, the waiters excellent – and Gowings was a great place for a party.”  – Rita Erlich, Melbourne By Menu (see more below)

“Gowing’s was magic. Sophisticated stuff. Clever food. And crazy fun. One night, after an exceptionally big ratings win, I think (and I am not proud of this) I had nine servings of Beluga and chilled vodka shots and tiny blinis, before the inimitable and wise Ms.Jackie Weaver (to whom I happened to be luckily married) convinced Dennis to convince me that they had run out. And in the 1980s they cost $50 a serve!” – Derryn Hinch, The Human Headline

“Gowing, aware of the changing market, and in remission from bladder cancer diagnosed in 1988 bought the old Grace Darling Hotel – the birthplace of the Collingwood Football Club.” (Rita Erlich) At 24 years old, Sam became the licensee of this iconic bluestone pub in the heartland of Collingwood. When the Pies won the Grand Final in 1990, it was seen as a blessing and thus a new era was born for this historic landmark. Dennis Gowing died from a long battle with cancer in December 1991 and for the next seven years Samantha and her brother Chris Gowing  jointly owned and operated this historic hotel accumulating a raft of awards and industry recognition.

“Samantha was twenty-four years old when she took over her Father’s mantle as a prominent Melbourne hotelier. As an attractive, energetic, educated young woman seeking an income and an outlet for her talents at the end of the twentieth century, she could have chosen any number of professions. She selected hotelkeeping not only because of her family connections, but also because it gave her the opportunity to have a ‘public persona’, ‘gain notoriety’, use her ‘natural born’ womanly inclination to be a ‘provider’ while at the same time ‘be in the thick of things.”
– Dr. Clare Wright, Beyond The Ladies Lounge – A History of Australia’s female Publicans
[/dt_sc_two_third] [dt_sc_hr] [dt_sc_one_fourth first] During this era Sam and brother Chris turned Gowings Grace Darling into a multi-award winning culinary and entertainment emporium that featured fine food, vintage wines, prestigious artwork by Clifton Pugh and Tim Storrier, reaping a raft of industry awards including 3AW’s Pub of the Year, Best Hotel Dining Room and a coveted Chef’s Hat from The Age Good Food Guide.

Back in the days when cleanskins were unheard of and restaurateurs could not afford their own vineyards, we commissioned our friends at Diamond Valley Vineyards to produce a selection of great signature drops and chose our Tim Storrier “Natura Morta – The Burning of the gifts”  to Grace the label.

Her proudest achievement to date is the recent launch of her first book The Healing Feeling. BUY HERE
Self published by her trademarked entity Whole Happiness™ Publishing.