This is my version of a healthy recipe from Melbourne chef Andrew McConnell. Originally served with corned duck at his former restaurant called Moon Under Water in the Builders Arms Hotel, in the inner city suburb of Fitzroy. Andrew’s contribution to the Australian hospitality industry spans 30 years and his current restaurants include Cumulus Inc., Cutler & Co., Marion, Supernormal, Supernormal Canteen, Meatsmith Specialty Butcher,and Gimlet at Cavendish House which opened in 2020 in the … END_OF_DOCUMENT_TOKEN_TO_BE_REPLACED 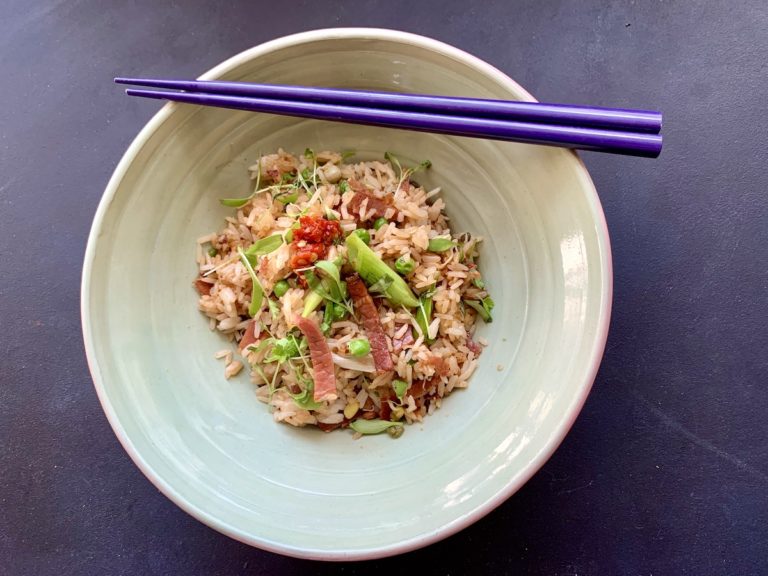 When I was growing up, bean sprouts were the only Asian ingredient you could get and you could tell a good fried rice by the peas! Since moving to Byron Bay, it’s the flavours of Melbourne’s Chinatown and Victoria Street that I miss the most so sometimes you have to make it yourself. This is comfort food - which can be healthy in its own right if it makes you feel good and you only have it occasionally. I bought all the ingredients at a local Asian retailer and I can’t vouch for the … END_OF_DOCUMENT_TOKEN_TO_BE_REPLACED

People always ask me can you eat beet leaves? Happily, yes! This recipe is inspired by one of Nigella’s from her important book How to Eat. I have reworked it a little, but you can use parsley instead of sprouts if you like. Here's a simple recipe about how to cook with beet leaves. I’ve been celebrating beets for years, especially the stems and leaves, which make a very restorative Beet Top Tea - a proven hangover tonic! How to cook with beet leaves 1 bunch beetroot with stems and leaves … END_OF_DOCUMENT_TOKEN_TO_BE_REPLACED