Every Melbourne Cup Day I trot this wonderful story out to my readers whom may not know this lovely ‘tail’.

The day before the running of the 1985 Melbourne Cup we were at Gowings Restaurant. The torrential rain began around lunchtime and continued throughout the night. With every downpour, came the cry from my father, “Open another bottle of champagne!”. My father Dennis’ horse, Cup runner #14 What A Nuisance loved a wet track. Awake at 5am and abundant with nervous energy, we set out for Flemington around 7am that Cup morning. The car park was already awash with muddy puddles and the heavens were constantly dousing the track. It was going to be a great day.

We nervously watched the bookies set up and waited for their financial appraisal on the probability of What A Nuisance’s chances. Their economic judgment hovered around the 15 – 1 mark. Pretty good odds for such inclement weather, enough to entice my brother Chris, who left the country soon after with his impressive winnings. The rain subsided a little and we visited What A Nuisance. We wished him winning vibes as he stood nonchalantly in his stall, looking as if he his race was already run and won.

Soon we were ensconced in the Owners and Trainers stand – the moment had arrived. The race itself was quite a blur – my hand firmly clenched within my dad’s, his eyes half closed, mine shut tight. We could hear the call amongst the crowd and What A Nuisance featured prominently.

The roar of the crowd as they came around the home turn drowned out any hope of hearing the result, however. The trainer, Geoff Murphy, was sitting behind us throughout the race. He leant down at the finish and said, “I bet you a thousand bucks your horse won”. To which my stunned father responded, “You’re on!” The happiest bet he ever lost! Next we were flying down the stairs, pirouetting at each turn and onto the mounting yard.

What A Nuisance in his final Cup parade on Swanston Street, Melbourne. A wonderful surprise when he circled the crowd, making a b-line for me. Legendary former race-caller Bryan Martin said later:
“They never forget”

The trophy presented we were whisked upstairs – it was time to formally meet His Royal Highness The Duke of Cornwall and Diana, Princess of Wales honourable guests of the Victorian Racing Club. Greetings were exchanged and congratulations offered; yet nothing could ever come close to the exhilaration of what had just occurred – not even the once in a lifetime opportunity of meeting a real Princess.

My father’s typical public persona took an unusual turn on that day as we prepared to scurry off the course. There was to be neither car park celebration nor parading of the trophy to the masses and media. He wanted to be private. He insisted I go to the Secretary’s Office to find something to secure the prize for transport. “What no box?” I asked them when they told me they had never been asked for such a thing. With no other option, we clumsily wrapped the Cup in a copy of The Age newspaper and headed straight for the car, dodging many a well-wisher along the way.

Once back in the solace of Gowings Restaurant, the party began with staff. friends, family and guests enjoying a swig of champagne from the hallowed vessel. A tradition which has been enjoyed in our restaurants on Cup day ever since.

Throughout the night a familiar cry could be heard from an exuberant Cockney orphan, “Open another bottle of champagne!”.

The 1985 Melbourne Cup was the first to be attended and presented by a member of the royal family. As part of their Victorian visit, the Prince and Princess of Wales visited Flemington, with Prince Charles later presenting the Melbourne Cup to Lloyd Williams, co-owner of What A Nuisance. The Cup has remained in the private collection of the late Dennis Gowing and his family, co-owner of What A Nuisance, since the great 1985 win, and was on long-term loan to the Australian Racing Museum and Hall of Fame between 2003 and 2016.

The Melbourne Cup was sponsored for the first time in 1985 and it was the first race in Australia to have a prize pool of $1 million, making it the most valuable race in Australia. Leading into the race What A Nuisance, just recovered from injury was at odds of 15/1. On a wet November day, with crowds at 80,000, What A Nuisance appeared to be overtaken and out of the race at the final stages, before a final surge took him over the line to win by a short half head.

Perseverance paid off when it came to the win of the 1985 Melbourne Cup. Both horse and jockey had recovered from serious injuries in the 18 months prior to the race – the seven year-old gelding What a Nuisance had suffered from back and ligament issues and the jockey, Pat Hyland, was told he would never ride again after smashing his shoulder in a fall. Together they participated in a heart-stopping race, for as they approached the finish, What a Nuisance appeared to be overtaken, and with a final surge fought gallantly to win by a nose.

The 1985 Melbourne Cup was the first to be attended and presented by a member of the royal family. As part of their Victorian visit, the Prince and Princess of Wales visited Flemington, with Prince Charles later presenting the Melbourne Cup to Lloyd Williams, co-owner of What a Nuisance. The Cup has remained in the private collection of the late Dennis Gowing and his family, co-owner of What a Nuisance, since the great 1985 win.

Stakes were particularly high on 5 November 1985. Sponsored for the first time and possessing a prize pool of $1 million, the 1985 Melbourne Cup was the most valuable race in Australian history. Despite the royal visit, attendances were down to the lowest seen since 1965. Overnight 34mm of rain had fallen on Flemington with the track rated as slow and a rail union strike continued, limiting access to the track. The weather could not have been better for What a Nuisance as the trainer John Meagher and Dennis Gowing later admitted ‘[they] had been praying all night for rain’.

In the lead up to the Melbourne Cup, Lloyd Williams and Dennis Gowing boasted to Derryn Hinch that What a Nuisance would win the Melbourne Cup. Hinch convinced the pair, that if the horse won, 10% of their winnings were to go to the charities Save the Children and The Variety Club of Australia – they honoured their commitments and gave $130,000.

Derryn Hinch continued: ‘The night of that Melbourne Cup win Gowing and I were at Maxim’s to honour the traditional winners’ dinner commitment. He started to get grumpy. “Why aren’t I at my own effing restaurant?” I told him to watch me and follow the bouncing ball. While Lloyd Williams’ wife, Sue, was distracted by the waiters I grabbed the Cup off the table, nudged Dennis in the ribs, and said “let’s scarper”. Language the English-born Gowing understood. We dived into the limo and burned down Toorak Road with me waving the cup out the window. It could have been hit by a tram. I didn’t know how much it was worth.’

The 1985 Melbourne Cup spent its first night after the race in the bedroom of Dennis Gowing – “I’ve been waking up every hour to look at it”. For Mr Gowing, the win came as a windfall birthday present – as he was born on Melbourne Cup Day 55 years prior when the legendary Phar Lap won. 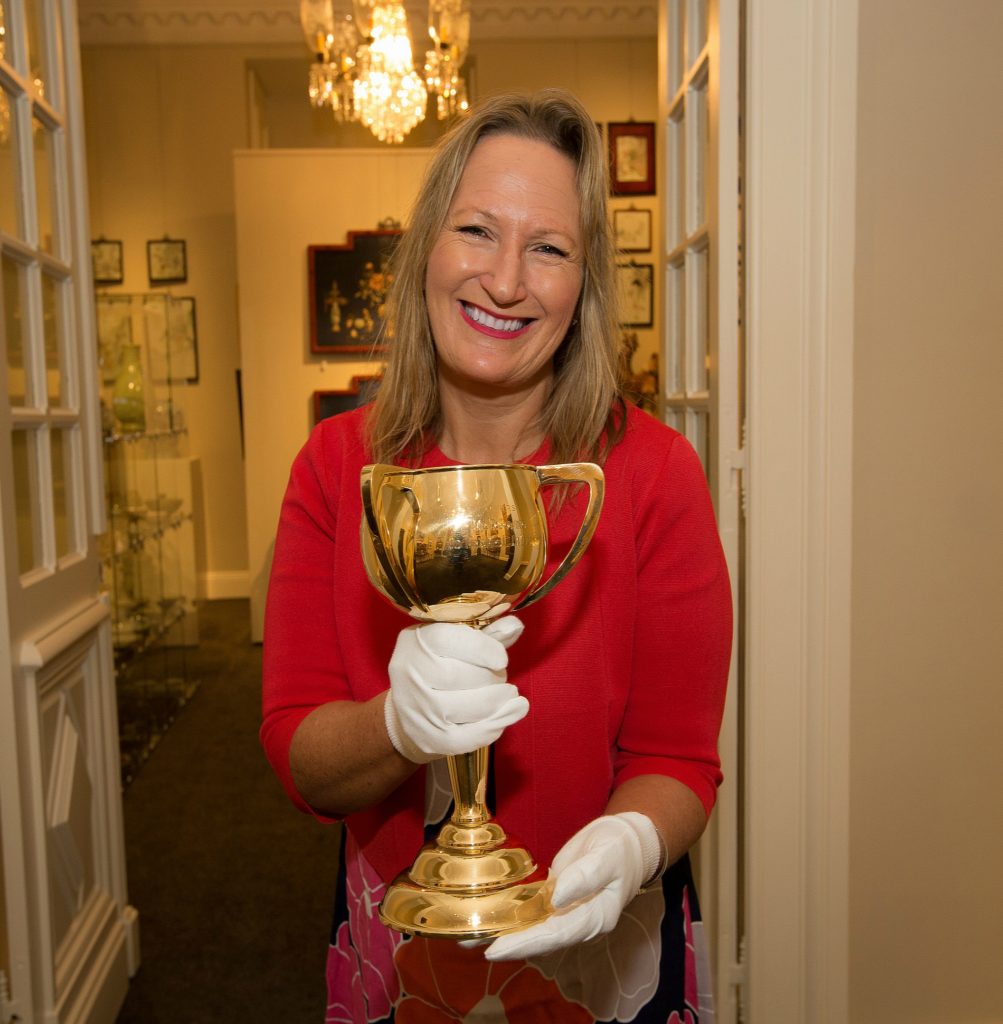 Sign up to receive the exclusive 3AW listener 20% off discount on Black Betty Bam twin pack!

Your unique 20% off coupon code is landing in your inbox soon for use on your next purchase.

* offer valid for all customers and includes shipping. This coupon code can’t be used in conjunction with any other offer.
** check your junk folder and be sure to add betty to your address book.